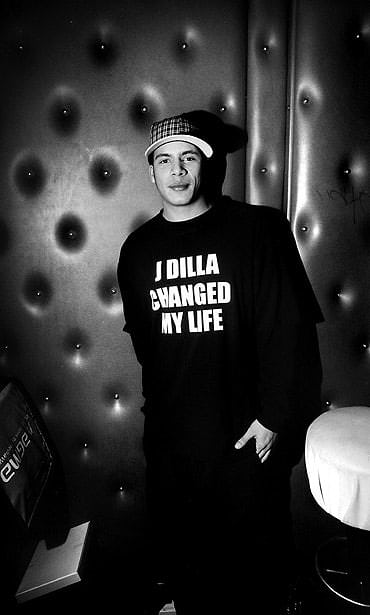 We didn't know his identity when we received a photo of a man wearing this hand-made shirt the day after what turned out to be J Dilla's last show in December 2005. But there was no mistaking the message: J DILLA CHANGED MY LIFE.

It was during this short Europe tour when J Dilla appeared on stage in a wheel chair when the public learned of the seriousness of his medical condition. We placed the photo on our home page, and were immediately hit with requests from people from all over the world asking if they could get one.

When Dilla returned from tour he remembered the shirt, and there was talk of making them available for the public. Dilla's mother also also recalled: "It was very inspiring – not just what it said but the fact that he made it and wore it up on the stage all night."

I eventually got in touch with the guy in the photo, DJ Deckstarr, who created the shirt himself. He was the opening DJ that night at Unique Club in Dusseldorf, Germany, December 2005. Here's his story:

"Let me tell you about the inspiration. It has to do with the photos of the concert in London, but it was mostly the reaction of the people that started to write all these negative things."

"I have been a hardcore Dilla fans for years … I can't think of any other artist that was able to touch me with music like he did. I have been waiting for years to get the chance to see this man perform and I was so happy that Dilla would come in December. I was reading all this stuff, 'this man should stay at home,' and so on. I was thinking to myself, why can't these people appreciate what Dilla is doing right now and just support him? I wanted Dilla to see that it is more than just music and that I support him from the bottom of my heart no matter what, because he has been there for me all these years."

J Dilla and Madlib are Jaylib

J Dilla and Madlib are Jaylib